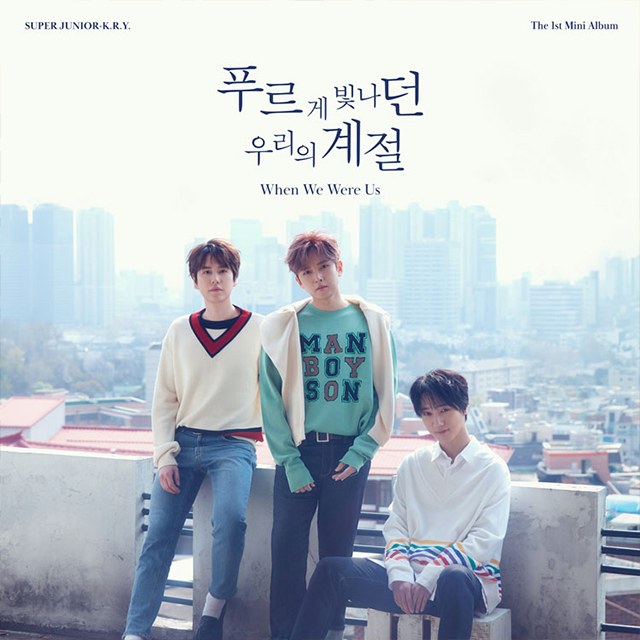 ‘Powerful Vocal Unit,’ SUPER JUNIOR-K.R.Y., Releasing First Mini Album in Korea, ‘When We Were Us,’ on June 8!

The new album, ‘When We Were Us,’ will be released in two versions, ‘COOL’ and ‘PURE,’ and it is the first physical album in 15 years after SUPER JUNIOR-K.R.Y. was organized as a unit with the ‘The One I Love,’ the OST for tvN’s drama, ‘Hyena,’ in November 2006, which makes it even more special.

This album is delivering a total of six tracks including the title song of the same name, ‘When We Were Us,’ and songs of high quality.

Other tracks, including ‘Way to Busan’ which amplifies the sad feeling with calm piano melody, ‘The Way Back to You’ which expresses the thrill that comes on your way to meet a person you love in a long time, ‘I Can’t’ which features fully energetic brass line, ‘Home’ which gives a warm comfort to your mind, exhausted after a long and hard day, and ‘Midnight Story’ which features the fairy-tale lyrics rendered against the night sky in the background, will let you fully experience the intense musical sensitivity of SUPER JUNIOR-K.R.Y.

The title song, ‘When We Were Us,’ is arranged to become more dramatic toward the second half along with the string line while the lyrics integrate the faint yearning toward the lover into the words. For it also remembers the fans who have supported them continuously, it is going to be a great gift for those who have waited a long time for SUPER JUNIOR-K.R.Y.’s album.

As SUPER JUNIOR-K.R.Y. demonstrated their influence by bringing 120,000 fans to ‘SUPER JUNIOR-K.R.Y. ASIA TOUR ~Phonograph~,’ the second Asian tour held in ten cities in Asia, including Yokohama, Kobe, Fukuoka, Seoul, Taipei, Bangkok, Shanghai, Hongkong and Jakarta, in June 2015, the first mini album, ‘When We Were Us,’ is expected to draw great attention.