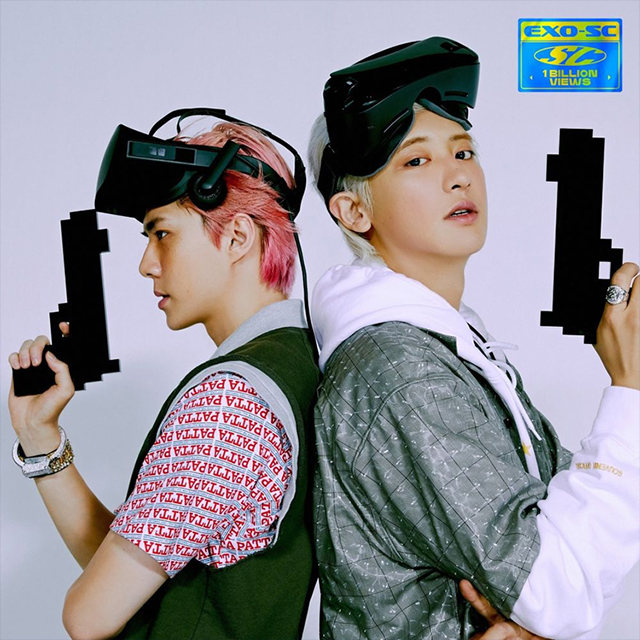 ‘Amazing Duo,’ EXO-SC, Releasing First Regular Album, ‘1 Billion Views,’ on July 13th!
SEHUN & CHANYEOL Wrote Lyrics for All Songs + 3 Songs of Their Own!
Teamed up with Producer GAEKO Once Again!

This is a new album coming out in approximately a year after ‘What a life,’ the first mini album that SEHUN & CHANYEOL released last July. The album contains a total of nine hip hop tracks rendered in various moods including the title song, ‘1 Billion Views.’

Especially, SEHUN & CHANYEOL participated in the writing of the lyrics for all songs in this album as they did for the last album and also included three songs, ‘Telephone’, ‘Fly Away’, and ‘On Me,’ that they created laboriously. The album will definitely be a chance to experience the unique music styles of the two members.

Also, GAEKO of Dynamic Duo produced all songs while GRAY, the representative producer of AOMG, SOLE, the new musician, and Boi B and Hangzoo of Rhythm Power participated in the production, raising the quality of the album. Talented musicians such as the rapper PENOMECO, the singer-songwriter 10CM, and MOON, the singer from MILLION MARKET also supported the production as featured artists and made the songs more charming.

‘1 Billion Views’ – Title song in trendy hip-hop genre, suited to your taste as an exciting ‘song to repeat’!

Album’s single, ‘1 Billion Views,’ is a hip-hop song that features funky guitar sound and disco rhythm. The lyrics are referring the heart that wants to continuously see the lover as the repeated replay of a video, and the melodical rapping by SEHUN & CHANYEOL is combined with MOON’s soulful vocals to capture listeners’ ears.

‘Say It’ is a hip-hop song that combines heavy 808 bass and bossa nova rhythm to create a mood for summer. The lyrics frankly depicted a guy’s heart that wishes to find out about the mutual feelings of love. PENOMECO participated as a writer and featured artist.

This album also contains solo tracks of each member. CHANYEOL’s solo, ‘Nothin’‘ is an R&B hip-hop song expressing his strong will that he will go his way instead of paying too much attention to other people’s saying. SEHUN’s solo, ‘On Me’, is a trap hip-hop song that sends a powerful message that he will do his best for himself in every moment.

This album also includes ‘Rodeo Station’ which talks about the past memories and present lives with the reminiscence of the Apgujeongrodeo Station that they used to come and go when they were trainees, ‘Jet Lag’ which is a lyrical R&B hip-hop song that depicts a growing yearning and love between lovers who can hardly be together while the time continues to pass by and the distance between the lovers continues to grow. ‘Telephone’ which depicts a guy who became fretful as his girlfriend is obsessed with her phone but still trying his best to look as if he is cool with it, and the instrumental version of the title song, ‘1 Billion Views’, nine tracks in total.